I always intend to make some cute things for Easter, then suddenly it's the week after and I realise it's far too late. Not this year! I set myself a goal and managed to sketch, draft, record and edit a PDF and video pattern in four days.

Here's some behind the scenes of this make, with the pattern linked at the end to Ravelry and YouTube.

The finished bunnies will also be available on Etsy as a one off, if you're so inclined. 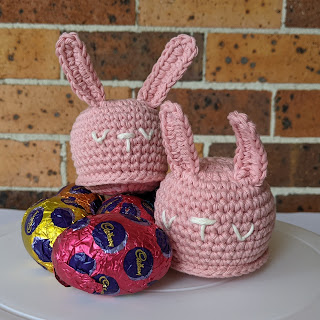 I started with sketching different bunny designs, deciding "what makes a bunny?" for what to include.

It can be tricky to know where to start, but I knew I wanted it to be a small and quick make. Both to meet my goal date and because I wanted this to be in my beginner patterns section.

I have been working on larger and more complex projects lately that can be daunting. This one was to use simple stitches that aren't too fiddly or time consuming to make. 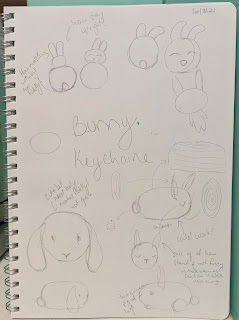 Once I had that down, I raided my stash of yarn to start playing with shapes and size.

I found I have a bundle of this pretty pink yarn from Scheepjes from a project a couple years ago, and knew it is great at making plushies as it is quite sturdy (even if a little split-y).

My energy took a bit of a dive at this point, but even while nestled in bed I was able to knock together a first draft of the plushie and also type up the pattern. 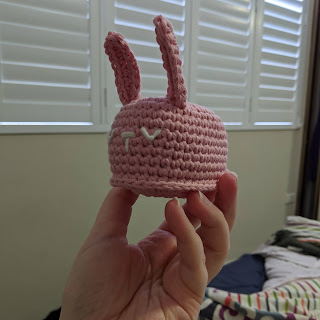 I made a few changes to the pattern after this, but I was confident it would be okay as is so I proceeded to record the tutorial the next day.

I used the same yarn, as I was happy with the colour and still had plenty of this to make more if it didn't work out.

My setup for recording video has gotten a lot faster as I finally have a space almost dedicated to that, so I'm not having to make room for it first. It was all mostly setup from when I did the triceratops too; though I did decide last minute to move the table across the room. This gave me better lighting but also used more energy that I had and resulted in a bit of a crash the next day.

I printed out the draft pattern and used it to make the video, reading out the pattern as I go so I have an easier time editing later. I can't use the audio from recording as it is too hard to control sound levels for that long, but by reading the script I can line up the final audio much faster, and I remember to slow down and pause where needed to make the visuals easier to follow. 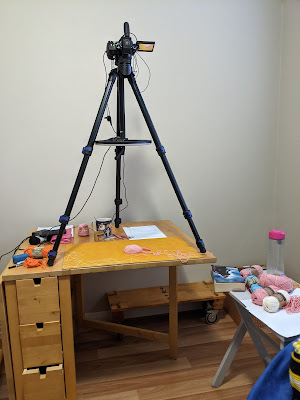 A keen eye may spot my current read on the corner there, Bitterblue by Kristin Cashore. I just found out she has a new book out so I've been re-reading the Graceling series. It's so darn good and I smashed through the series in less than a week. Only to realise I will need to borrow the book from the library and it's on reservations.

Learn from my mistakes and look up availability before you need the book!

Anyway, with the video recorded, I was on to the audio. We have been surrounded by construction work the last few months, with only Sundays and nights clear. It has made it truly interesting when trying to focus, let alone do clean audio, but we make do.

I put together the script and was able to record it pretty quickly that night (unfortunately truly pushing myself too far, as I found out the next day), but at least it was all ready to go.

I created the graphics for on screen in Canva - a free design website which I have found really handy for this purpose. Even while using the free version, I edit the output in GIMP to add transparency so the overlay is somewhat clean. 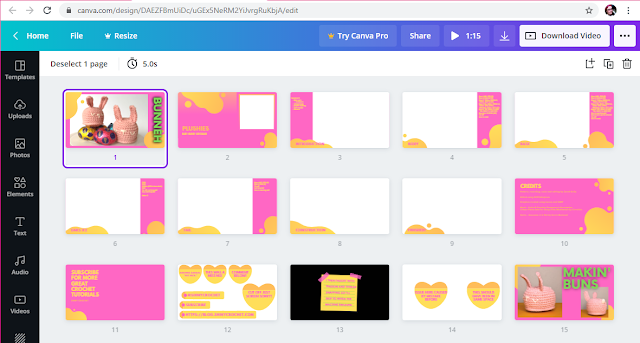 At last, I was ready to edit the video in HitFilm Express.

I have been using this program for a couple of months now and have found it to be very stable. I had been using other programs over the years and found that with my longer or more complex videos the program would become slow or even crash.

Even once I updated my computer it was hard to find something to handle the way I edit, but this has been so easy to use and hasn't crashed.

I will point out, I am in no way sponsored or get anything for mentioning these, I just like to share the resources I use. All of these are completely free to use, generally with paid upgrades/add-ons available which I don't use at this time. 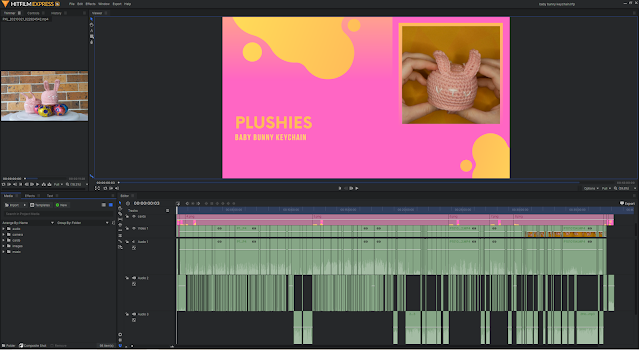 With the techniques I've learned to speed up editing, this only took one day to edit. I was also able to finalise the PDF document for the written pattern which will be up on Ravelry.
I had to take a couple days off then as I was struggling with energy and focus. Once I'd recovered some more, I was able to make a third bunny, this time using Bella Baby Nippers yarn, which I had in my stash from a fun scarf I was commissioned last year.
This time I made just the top half of the toy, leaving the base off so it's hollow.
I thought it was a cute idea for an Easter hunt hiding spot as it is the right size for hiding an egg under.
I had to order some eggs especially for it, since I can't have chocolate at the moment. At least my partner will get a nice treat now the photoshoot is done! 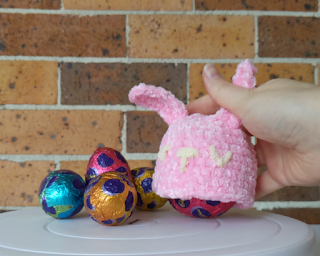 At last, the video and PDF pattern are complete, with some bonus footage and photos of a cosy variant to the plushie.
The toy itself can be made in under an hour, probably faster without distractions.
Give it a go and let me know what you think!
Written PDF pattern available on Ravelry: https://www.ravelry.com/patterns/library/baby-bunny-plushie
YouTube tutorial available here: https://youtu.be/RFSrcljGoAs
If you make one for yourself or as a gift, be sure to tag me on social media! I'm @shinycrochet on all major platforms, and I love to see how people make my designs their own.
To support my work, check out my Etsy store where I'll be listing some of the finished products made for my channel, along with my paid PDF patterns.
Fluffy Bunny Cosy
Baby Bunny Plushie
Have a lovely day!

At long last, I can announce the start of my first crochet along! Launching 16 May 2021, we will be making a Hobbes inspired tiger crochet plushie.  Dining out in style The pattern is brand new and will be releasing in line with the craft along free on Ravelry and YouTube!  I have worked incredibly hard on this project for coming up to two years, more details on that on Sunday. The pattern will be available as both written and video tutorial, for your preference.  The pattern has been split into ten parts with a PDF and video per section (plus intro), the schedule: Introduction / Trailer - 16 May 2021 8pm AEST Part One - 23 May 2021 8pm AEST New release every 2 weeks Part Ten / Final release - 26 September 2021 8pm AEST Be sure to subscribe to my channel on YouTube to be notified on releases: https://www.youtube.com/c/shinycrochet The full list will be available on this playlist as they are released:  YouTube Playlist. The PDF will be on  my Ravelry – I will trigger an update email wi
Post a Comment
Read more