When I first started my YouTube channel, I thought I would just focus on patterns. There’s already so many videos on how to do the stitches or starting projects. But over time I came around to the idea, because despite all those other videos existing they aren’t the way I would explain them.

Thus the Beginner Series was born. It has started with four videos covering the areas I remember getting stuck on most when I was learning crochet 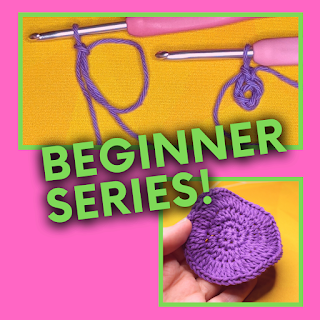 It was also great practice for me with editing because they’re much shorter than my other videos. I have a massive project coming up which will need to be broken into a series and being able to reference these videos to help adventurous beginners will make it much less stressful for everyone involved.

I have plans for more videos into this series, do you have any suggestions or ideas?

The first video is for starting in the round, using either a chain start or magic circle. My very first crochet make was a beanie and the chain method was the first thing I did. I never really liked how it looked on beanies or plushies because I can never make completely closed (there are methods but it’s hit and miss in my experience).

Years later I learned the magic circle / magic ring, and with lots and lots of trial and error, practice and testing I finally had it down. The biggest lesson with magic circle is make sure the starting tail is very securely locked otherwise it may come loose and the project will unravel. I included a section on this at the end of the video to help.

The second video was the next logical step, the stitches: single crochet, double crochet and half double crochet. I decided to do all three in one so it’s easier to compare what the differences are if a new crocheter is following along.

As always, I use US terminology because the YouTube channel I learned by watching was US based. Begin Australian has meant confusion on what is ‘right’ and at the end of the day I don’t think it matters as long as pattern writers make it clear which language they’re using.

It was very interesting to record the audio for this section and I have to thank my partner for putting up with that session. So much necessary repetition. Say it with me, “insert hook, yarn over, pull through”. I cover the process for increasing with single crochet, double crochet and half double crochet.

I also included reference for when it’s an increase of more than two stitches in one. This is something that comes up pretty often when I am making plushies or designs, I know the first time I came across it, I was a bit thrown, but seeing it in a video makes so much more sense.

The final part of my first ‘season’ of this series is decreases, which I’ll be honest I avoid more than I should because it can be hard on my hands to keep tension. It is a very important skill to build though, particularly for plushies or amigurumi.

This was interesting to plan how to film since the decreases will make the project curve in on itself. I wanted to do it on a straight edge to show how the decreases effect the project. It worked much better than I expected, especially when I did the final section with three stitch decreases!

Once again, I cover the decreases for single crochet, double crochet and half double crochet in this video, including a bonus section for decreasing each joining three stitches into one.

There we have it! Season one of my beginner crochet series is done and live, be sure to subscribe to my YouTube channel https://www.youtube.com/c/shinycrochet to stay up to date with new patterns and tutorials coming out. Up coming videos will include fun like upsizing a festival shirt with crochet, a dinosaur plushie and more beginner series.

The next planned beginner series will cover:

Any suggestions or ideas on what else to cover for a beginner crocheter please drop a comment below or on my channel! I love hearing from you and really want to help others on their journey into this wonderful craft.

Have a lovely day!