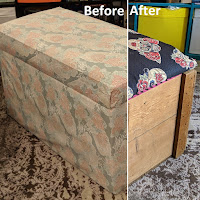 This was a few years ago, but I love showing off our ottoman. We had moved to a new apartment and we needed a new coffee table that felt comfortable to put feet on, and for storing blankets and pillows in.

New ottomans can be expensive, so we were looking through second-hand stores for a bargain and something interesting. I was hoping for something to become a project (my partner, not so much).

It took some hunting, but finally we stumbled onto this beauty – for only $15!

With just a glance, you know the story of this box.

The top has a hinge lid with treated timber inside, no chipboard here! It is very heavy and feels sturdy to rest our feet on.

The fabric was an easy way to update the box without being a massive job.

I was worried about splinters for anything to be stored inside, so a lining would be needed.

On inspection, the existing fabric was just stapled in place, obviously done with care. Even at this stage, we assumed it was a box knocked up at home then covered.

How we were proven wrong later.

Using my handy-dandy Ikea tool kit, I used a combination of back of the hammer and flat head screwdriver to pull out the staples and start removing the fabric. I started with the lid as it was easier to access.

I was stoked to find there was another layer of even older fabric.

I regret not getting a few more in progress photos, particularly the foam under the lid. It was a weird mix of a few different foam blocks glued together.

We did remove the foam, in part because smelly and old, but also it made the ottoman too tall for resting feet on with our couch.

A cheeky trip to Spotlight (craft store) was in order for getting the right fabric to re-upholster. We stumbled onto a beautiful skull and flower fabric, which met both my need for pretty, and my partner’s desire for dark fabrics.

It came in two options of navy or cream background. We got some of both, planning on using the dark on the lid, and cream on sides. This way to lighten the room, but reduce marks showing from use on the lid.

I also needed a way to attach the fabric to the box, I don’t own a staple gun and don’t have use for one in general. I checked out upholstery pins at Bunnings (hardware store) and found these cute daisy head pins. I had no idea how many I would need so I got a pack of four (only three shown here for nice square photo).

With a hammer and some patience, this would work very nicely.

We were already amazed at our luck on such a cool looking box for a great price, but oh boy it was so much cooler once I got the fabric off the sides too.

Once we saw it, we both agreed there was no way the sides were to be covered by fabric. The lid was now uncomfortable though, so I would proceed with covering that once I decided on a padding solution.

In no way were we expecting to uncover an antique removals box, but here we are.

First step was to line the inside. This would give me practice as laying fabric and using pins without it impacting final external look. I picked up some cheap pink poplin for the liner as it was simply to protect the blankets and pillows to be stored inside.

I started by lining from the front line to the back, with enough fabric at the sides to fold over to hide the cut edges. I pinned all along the front of the box, then lined up the other side, making sure there  was enough fabric to go all the way to the opposite side, leaving the sides uncovered for the moment.

This would cover the front wall, back wall and the base.

I set the pins 1 inch apart roughly, to ensure the fabric was held tidy. It was a very slow going process, as the timber is very aged and keeping them lined up straight needed attention.

The sides were lined with a piece each, wide enough to fold on all edges to hide seams and also go a few inches under the fabric from the first piece at the base.

I then pinned along the top edge. Once secure it was then a matter of inserting the end under the base fabric and pinning that to the side as low as possible.

There wasn't need to do more pins at the bottom, as things won't be moved about much, it's just enough to secure it and stop things being lost.

The box then stayed at this stage for seven months while I was stuck on how to proceed. It was also a very physical task, so I wanted to make sure I had the energy and strength to finish what I started.

I really liked the pink lining, it peeks out a little bit from the sides of the lid. The wooden top was actually a great coffee table, but I love putting my feet up (which I more recently found is actually due to a medical condition) so I knew I would have to return to it.

The first thing I had to do before starting was decide on how to line the top of the lid. The goal was a softer top for resting feet on, particularly around the two braces. I looked at getting foam cut, but for many reasons that didn't feel right.

I went with cheap and easy solution of blanket wadding from Lincraft folded over many times, with extra in the middle between the braces on the lid.

I didn’t bother too much making the inside of the lid pretty; instead wanting to make it Done. So I started by measuring out enough fabric to cover the lid plus several inches for folding over and pulling tight.

First, I attached the front of the lid along the long side, to then give enough strength for tightening.

Then to avoid the hard part (joining around the hinges), I attached the sides down.

Then there was just the final part, the back edge that includes the dreaded hinges. For each hinge, I cut a single line up to the inside of the hinge, then a horizonal line towards the outside.

Threading the middle part between the hinges and pinning in place, it just left the outside edges to be tidied. Finishing the same way as the sides, with a diagonal fold, it was all ready to go.

At last, seven months later, the ottoman was complete!

We first got the ottoman home in September 2018, and it was finished in April 2019 so it was a bit of a process, but I definitely feel it was worth it.

I still have some navy fabric left over and a tonne of the cream fabric. It was going to cover the sides after all, but it is too unique as is to do so. I have since used the fabric, but that’s another blog to come.

An interesting thing with any upcycle project is the final cost, particularly when it starts as a plan to save money. So I guess the question is, how much did this cost?

Really happy with the final project not only being unique, but also cheaper than if we had bought it new.

This has been an interesting piece to own, particularly after we moved (twice) and were able to get a proper coffee table again. This lives in my office now. It continues to store blankets and spare pillows. A nice seat under the window or temp spaces for projects to rest to keep them out of the lounge room.

As a final note, it has been almost a year since I last uploaded here. The last year was hard on everyone, and my personal health took a big turn for the worst. I’m still figuring out chronic illness and how to fit at a new job, but I also want an outlet for my crafts.

I have no idea what the update schedule will look like so check out my socials for regular updates. Continue to expect varied crafts as I have been enjoying branching out from crochet. Sewing, embroidery, painting and more to come.

I have always been drawn in by pretty shawl patterns, particularly with the gorgeous designs being released all the time. I decided to have a go at writing my own which would be light weight and using basic stitches to making it a more mindless task than the more elaborate designs.  The pattern took a lot of time to complete, as I was learning a lot at the same time as writing it. I would focus on it for a few weeks, make some good progress, then put it off a couple months.  This made the shawl sit in an interesting place in my mind as it developed through some strange times, starting to realise I was unwell, moving apartments, the bushfires starting in Australia, my brother getting married. Such a jumble of emotions and stories woven into this pattern. (10 minute read) It was so lovely to then wear to my brother's wedding, even though it was late Spring by then and fires raging all around.  Shawl's first outing This process started around May 2019, at which point I was teachin
2 comments
Read more