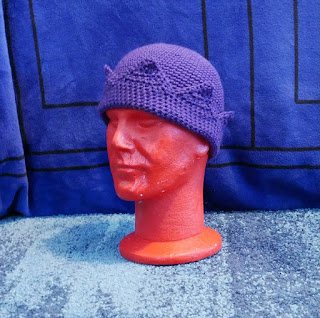 In early 2017, a friend sent me a screen shot of a boy in a hat and asked if I could make it for her.

I was a little put off initially, as I could tell it was a knit design, but I decided to give it a go.

The base was simple enough, but the triangles almost stumped me. I stuck with it and finally got something I was happy with, and even better my friend loved it when it arrived.

I didn’t think much else of it when I shared it on my page, I was happy with the design and assumed it would be a one off - until someone asked if it was a Jughead beanie.

Suddenly it clicked – Riverdale was coming.

Archie wasn’t something I had seen much of, other than the odd comic strip in the newspaper. I had heard murmurs online about a new show coming. I bit the bullet and started an Etsy store. Until this point, I made a few ad-hoc requests, making enough to cover some of the costs of the hobby.

My ‘customers’ were usually friends and family, maybe with a few degrees of separation. The rare request would come through social media (Google+ was oddly popular when I first started); but having a Store was something else.

The listing was up, folks from anywhere in the world could now order a whoopee cap of their very own. It started off a ‘Made-To-Order’, but within a couple months I changed to pre-made. I couldn’t keep up with demand.

Grey hats were all I was making.

Trying to fit 40 hours of crochet around a 40-hour work week, while commuting 4 hours a day was a perfect way to burn out and start to hate a hobby.

I have so many photos like this, where I had many beanies completed and ready to ship. I had started receiving requests for pure wool options, as I was using acrylic by default. A tricky part of this is the acrylic yarn often works up differently to wool.

I tried a few options before settling with the Four Seasons 100% wool, though it isn't particularly soft, it usually fell into customer's price range. I continued to offer the beanie in the original maroon I had been requested for, but majority of requests were grey.

I had to change things up!

I was starting to make some other projects, but also wanted to stretch my creativity by updating the basic pattern. The first for this exercise was the ‘Ugly’ Christmas Sweater themed beanie.

This was a fun one which I made on the train to work, alternating as I felt between colours and trying to add different stitches throughout. There were some bobbles, crisscrossed double crochet, and half double crochet from memory.

The finishing edge in white combined with a fluffy pom gave it the perfect Christmas edge I was hoping for.

Too bad we are in Australia and couldn't quite enjoy it through the festive season. This beanie ended up being gifted to a friend through Dirty Santa shenanigans.

After two months of making the same thing again and again, I decided to write the pattern for others. This was a new endeavour for me - while I had written patterns for my personal reference, I hadn’t written one for anyone else.

It was a new experience working through the pattern, translating it from my own handwritten notes into a more formal document. I photographed each step of the way to add to it, because I wasn’t sure I was conveying the steps clearly enough in writing.

I had a few friends test the pattern, finding some key fixes where I had realised what I’d written was different to what I was doing.

Finally, I had something to upload for purchase after weeks of work. It can be found on my Ravelry page for purchase.

I have continued working on it, fixing errors and adding more versions, such as Kids and Baby sizes.

I sourced pins to make the badges to add to the hat, though I usually give the option of sewing them in place especially if it’s for a child because the pins can be sharp.

An unexpected request was for a keychain Jughead beanie. I love how this came out, especially because the pattern doubles as a ghost from Pacman.

Though the hype has quietened, I’m so glad for that first message asking me for a beanie. It resulted me to learn writing patterns (rather than winging it every time) and has definitely improved my crochet speed.

This year I have started making video tutorials. Turtles came first, because it’s the smallest pattern, but was quickly working up to the Jughead beanie pattern. Focusing on the patterns I knew best, meant I could focus on learning how to edit, what works in this shiny new medium and how to help the video be found.

I also made a video of the keyring pattern.
I am truly proud of this pattern, but I have been doing my hardest ever since to never use grey yarn again!