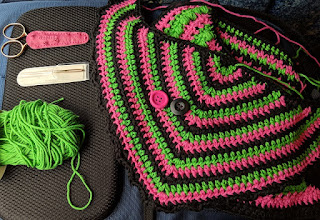 Bibs of all colours!

Content Warning: This blog will include topics of babies and pregnancies.

Entering my late twenties meant entering the time of the baby showers and first birthdays. Having a crafty hobby means I can work up unique gifts, as I don’t know what store-bought items a) are already purchased, b) are useful or c) will end up being outgrown before use.

A handmade baby blanket has been a safe bet, though I like adding something more to go with it. I was presented with a fantastic solution for this, crochet bibs! There are so many useful (and useless) baby products available, so why these bibs?

Stitches By Trudy Bobble Bib pattern is my go to bib pattern. It is decorative, suitable for any gender and easy to adapt for any colour theme.

These aren’t specifically for new-borns; I would suggest they are more useful in the later baby stages leading into toddler-dom. The cotton yarn recommended in the pattern is perfect for catching and absorbing drool.

Rather than frequently changing shirts (which no one wants to do, especially through the cooler months) these absorbent cotton bibs are a nice addition to outfits in place of traditional bibs for when the baby is being fed.

Changing colour every two rows while using two colours meant I could carry the yarn up the side without frequently sewing in the ends. These bibs were made using Spotlight Flinders 100% Cotton yarn in 4ply as it has gorgeously bright colours and is easy to use. I could also pick it up in store rather than ordering online.

For the second bib, I changed up the pattern a bit and used three colours throughout. I kept the stitch count each row the same as the original pattern but did half double crochet on every row. Changing colour every row and alternating between three colours allowed me to continue carrying the yarn rather than sewing in a lot of ends.

The border once again hides the carried yarn and gives the bib a finished look.

Using 100% cotton yarn keeps the bib ultra-absorbent, to catch the dribble for days. As the baby starts chewing on everything, it can also be gentle enough on baby’s gums while also giving them relief (always check for threads).

The buttons can be done in many ways, I had some perfect colours already in my collection. I sewed them on and tied in the ends – using extra long tail to ensure they are not coming off.

I pair the bibs with some face washers using lemon peel stitch. I don’t have a pattern for this - I was shown how to do the stitch and worked up a couple at roughly the size I wanted. I also use this pattern to make dish cloths, though I make them smaller and in recycled cotton.